Prestigious Art Deco hotel in the heart of Viareggio, just 12 miles from Pisa

A 1920’s architectural masterpiece in the coastal resort of Viareggio. Behind its impressive façade, Grand Hotel Principe di Piemonte has five floors of themed accommodation with a 2 Michelin-starred restaurant, two bars and a stunning panoramic rooftop bar beside a heated outdoor pool.

Each one of the five floors has rooms in contrasting décor from International which is styled on 18th-century Paris, to Art Deco, Colonial with Indian Influences, Empire and Modern. All the rooms at Grand Hotel Principe di Piemonte have views over the Apuan Alps or the Tyrrhenian Sea and beautiful marble bathrooms.

Enjoy gourmet cuisine at Il Piccolo Principe, inside or on the sea-view veranda. Visit the Grand Hotel Principe di Piemonte’s wellness centre, an oasis of aromas, colours and music, and indulge in a moisturizing honey massage. Then enjoy a glass of wine in the warm and cosy ambiance of the wine cellar bar. 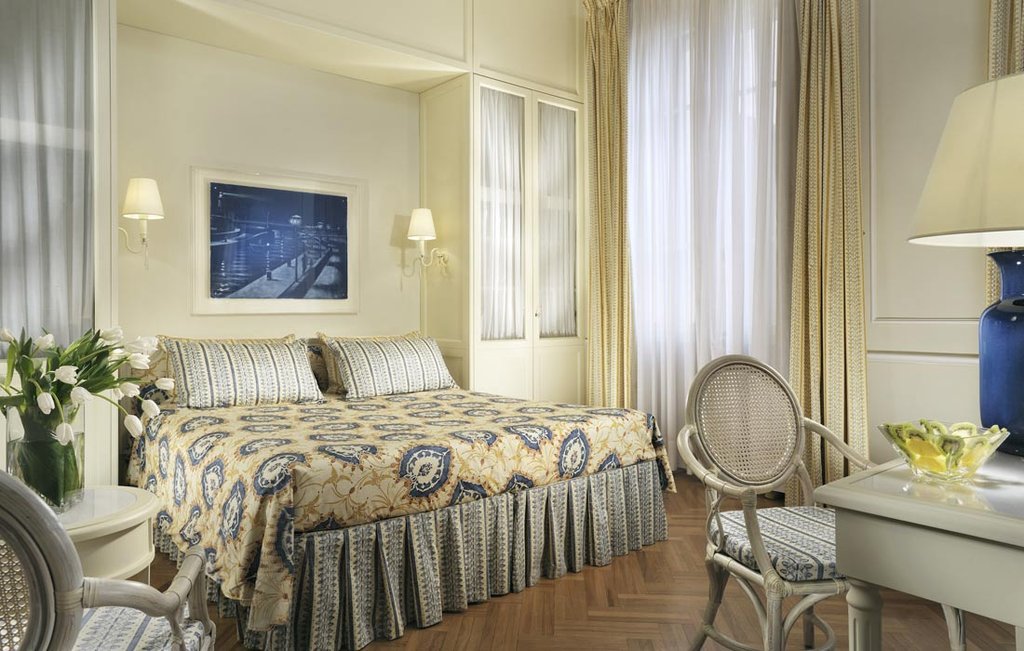 The classic hill view rooms overlook the inner side of the building and those located on the higher floors enjoy a picturesque view of the Apuane Alps.

The classic hill view rooms have a minimum area of 16 sqm (172 sqft). 1 queen bed or 2 singles, complemented by the Privilege Beautyrest Simmons mattress. Your overnight stay is completed by four pillows (2 feathers and 2 hypoallergenic). 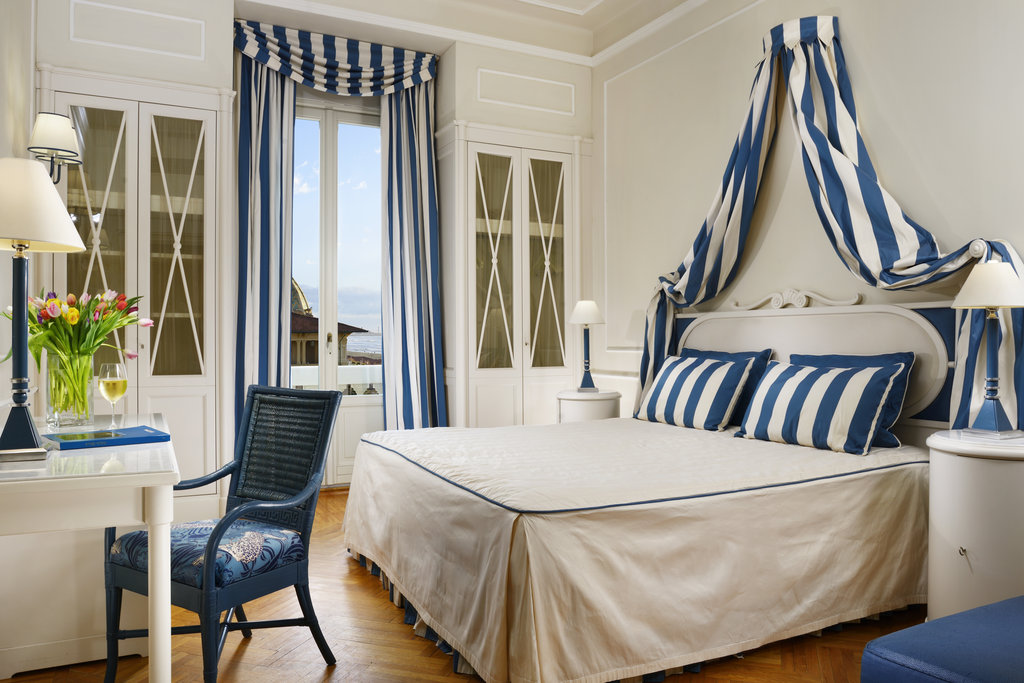 The Superior Side Sea View rooms, minimum area of 22 sqm (236 sqft), overlook Puccini Square, one of the most beautiful square of the town.

Enjoy a picturesque view of the sea thanks to their panoramic location. 2 twin beds that can be joined together into a queen size double bed, complemented by the Privilege Beauty Simmons mattress. Located on the 4th floor, are decorated in Empire Style. 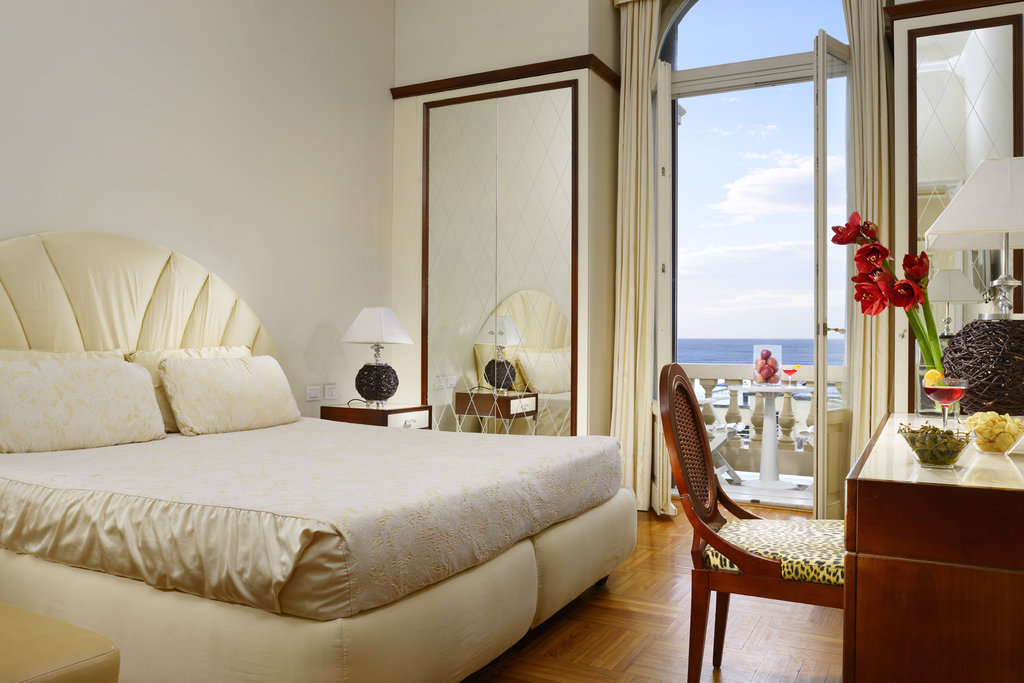 Overlooking the famous Viareggio promenade. They enjoy a picturesque view of the sea thanks to the spacious balcony with table and chairs. Stay is completed by Privilege Beauty Simmons mattresses and 4 pillows. 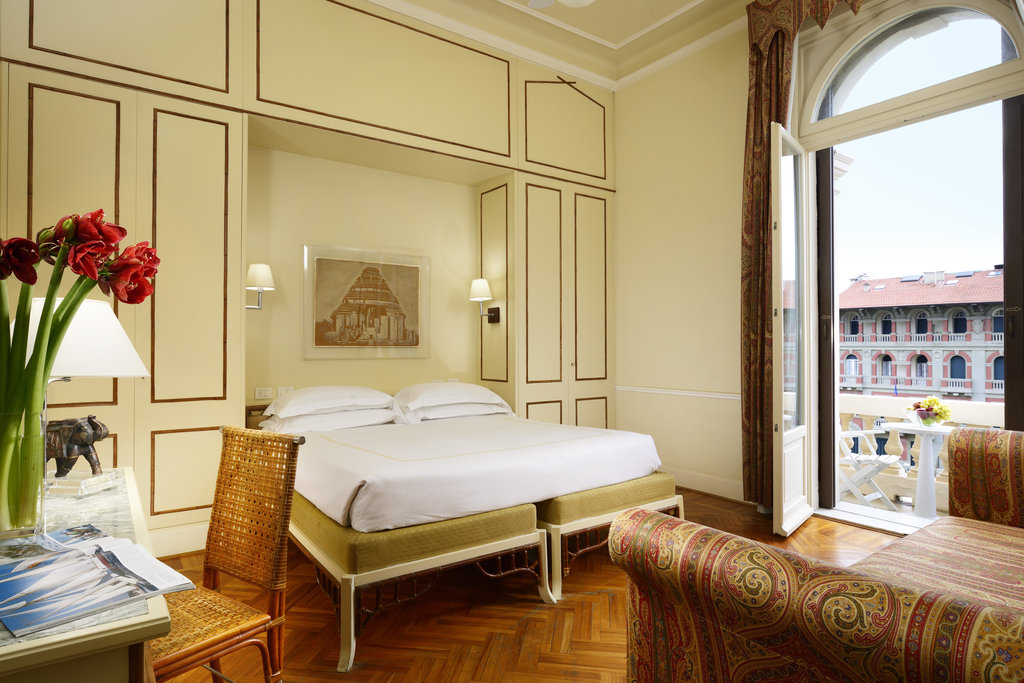 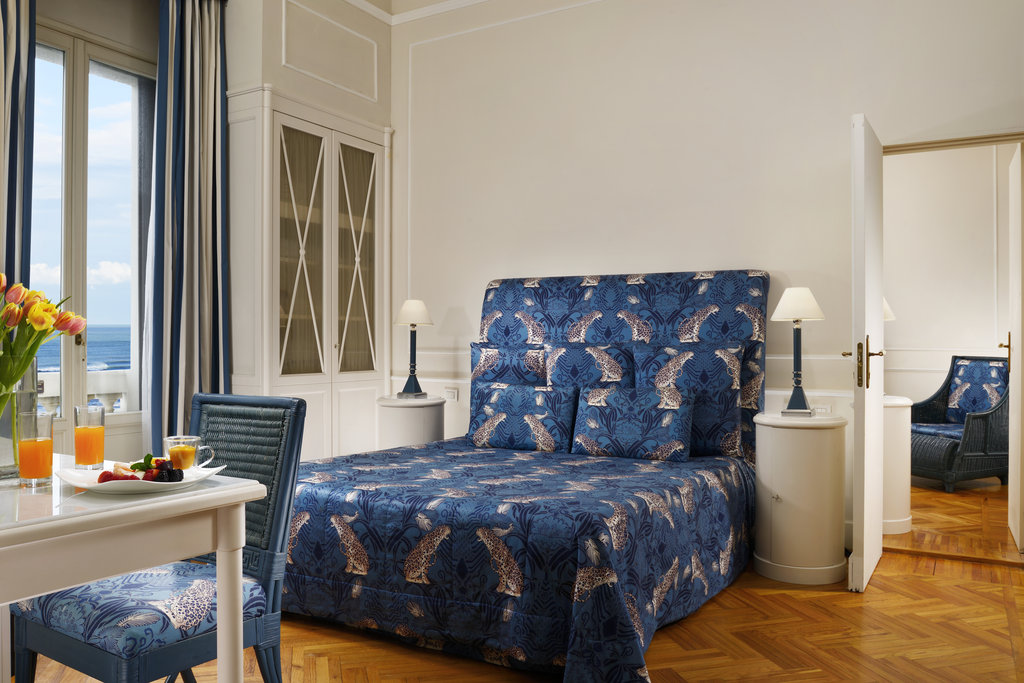 The Family rooms are made of two connecting superior front sea view rooms for a total area of 44 sqm (474 sqft), can accommodate up to 4 people in queen or single beds.

They overlook the amazing Viareggio promenade and enjoy a picturesque view of the sea thanks to their panoramic location. Parquet floors, bathrooms in marble and Privilege Beauty rest Simmons mattresses with 4 pillows. 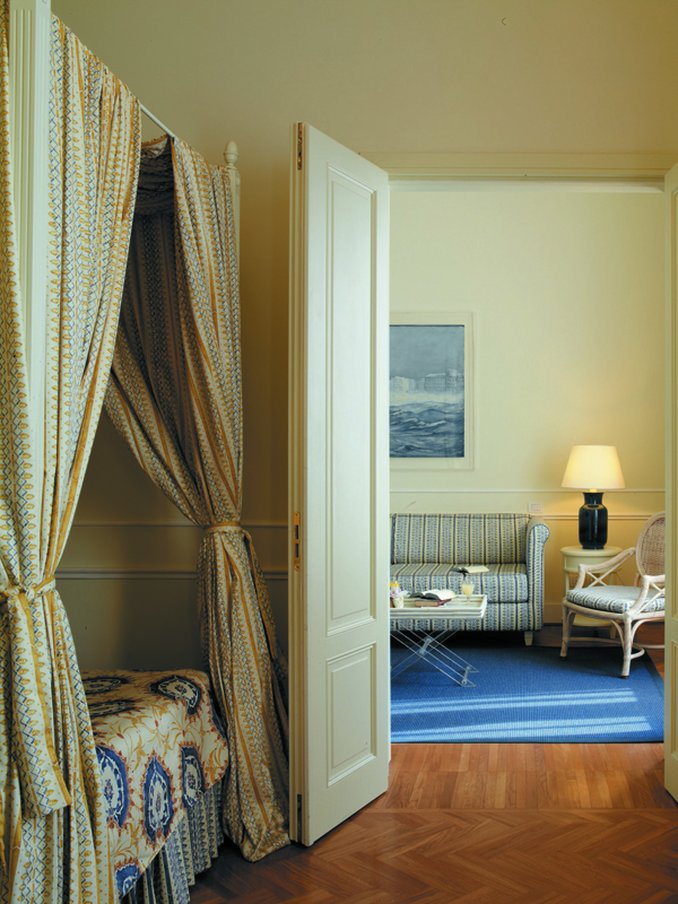 The Junior Suite front sea view with balcony, 65 sqm (700 sqft), hardwood floor, bathroom in fine marble, and walk in closet, enjoys a picturesque and fantastic view of the sea. 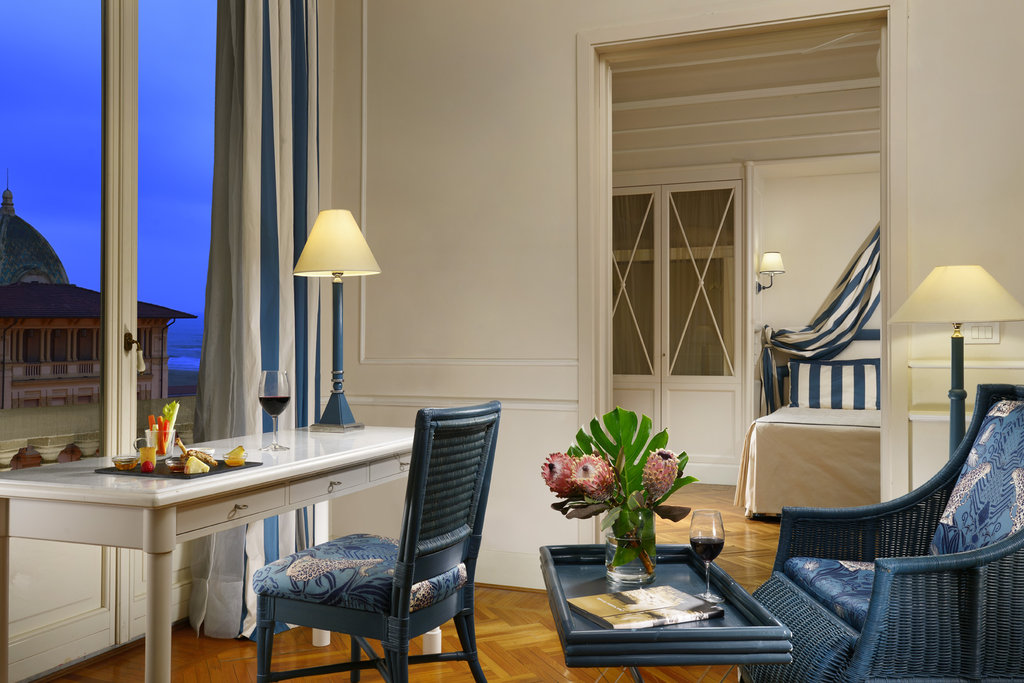 One Bedroom Suite Side Sea View

One bedroom side sea view suite, big and comfortable room composed of one double room and separate living room for a total area of 42 sqm (452 sqft), overlooking Puccini Sq.

With a picturesque view of the sea thanks to its panoramic location on the 4th floor in Empire Style decor. Hardwood floors, bathroom in fine marble and queen size bed with Privilege Beauty Simmons mattress and 4 pillows. 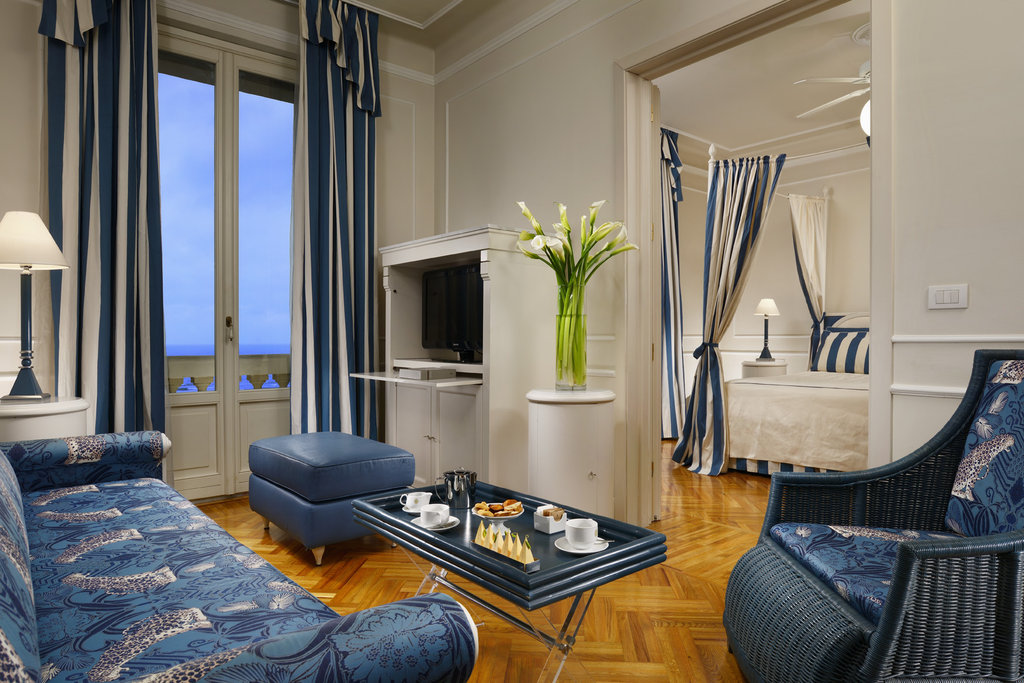 With a picturesque view of the sea and the promenade, thanks to its panoramic location on the 4th floor. Hardwood floors, bathroom in fine marble and queen or king size bed with Privilege Beauty Simmons mattress and 4 pillows.

11 Superior Side Sea View with Balcony

Superior room with side sea view and Balcony. 22 sqm - deco and colonial style.

13 Deluxe Sea Side View with Balcony

Regina is a traditional Tuscan Restaurant located at the ground floor of the hotel- where you can taste all the best recipes of the old Tuscan culinary tradition- in the beautiful restaurant with its Veranda.

Dea Wellness Centre - Water features, saunas, a fitness centre, massages, and holistic beauty treatments: here you will have the chance to relax completely with a reinvigorating and multisensory experience in an elegant environment. Spending a few hours at the Grand Hotel Principe di Piemonte’s Wellbeing Centre will regenerate the senses and relax the mind allowing you to forget the smallest concerns of everyday life.