In the leafy and stylish suburb of Kifissia in Northern Athens

A refined and luxurious retreat, Theoxenia Palace Hotel, is an oasis in the heart of Kifissia, a stylish suburb in Northern Athens. Featuring attractive gardens with an inviting swimming pool to relax and rejuvenate after a day of sightseeing at the Acropolis just 20 minutes away, or a busy day of work or shopping in business district of Maroussi, very close to the hotel.

Expect elegance and refinement at every turn with deep rich fabrics, dark wood furniture, crisp white linen and attractive works of art. Theoxenia Palace Hotel Kifissia, is a blend of classic and contemporary design styles with a warm and inviting ambience.

Spend some time in Kifissia, renowned for its designer boutiques, trendy cafes and bars. Back at Theoxenia Palace, check out the fully-equipped adults only health club and enjoy a sauna or a dip in the indoor swimming pool. Having worked up an appetite, try the Greek delicacies in the Theoxenia Palace Restaurant & Bar that serves food and drinks throughout the day. In the summer time, it's particularly nice to enjoy your lunch pool side. 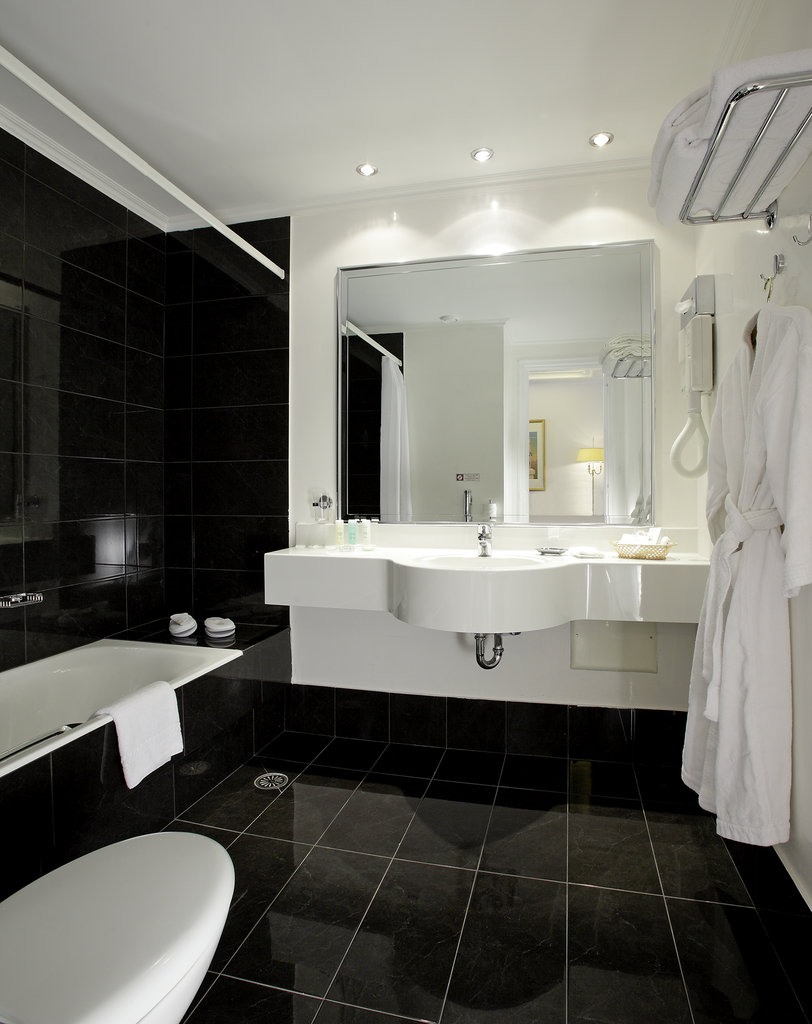 Some with private balconies. All rooms have been enhanced with classical furnishings, beds of pure comfort and the latest 32-inch LCD High Definition TV with Internet access for viewing Youtube clips, Netflix, Bluray and DVD player. 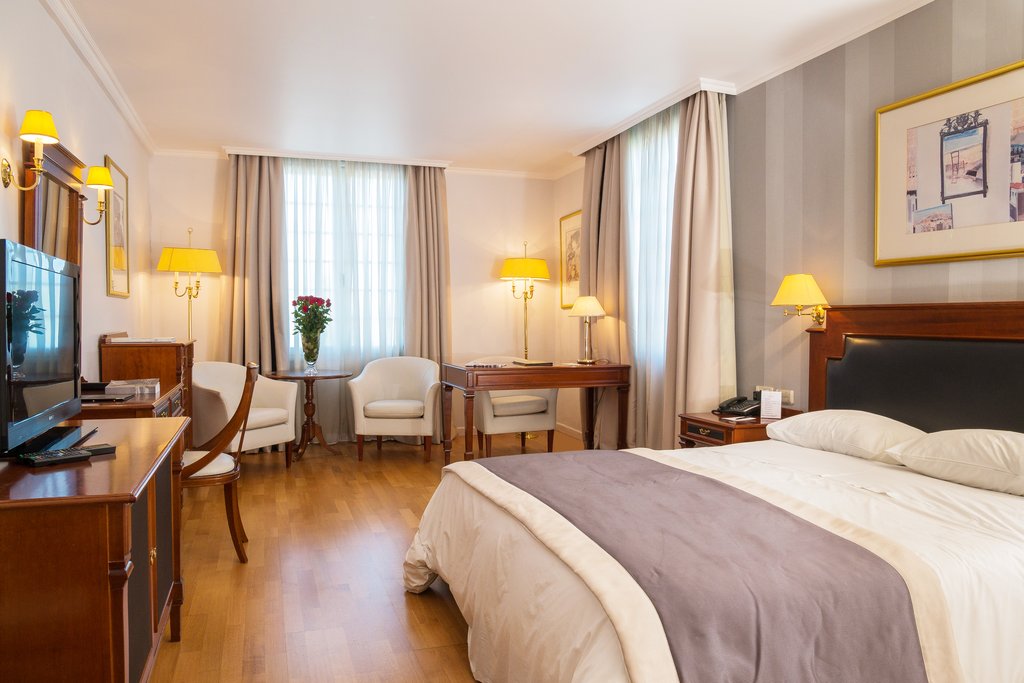 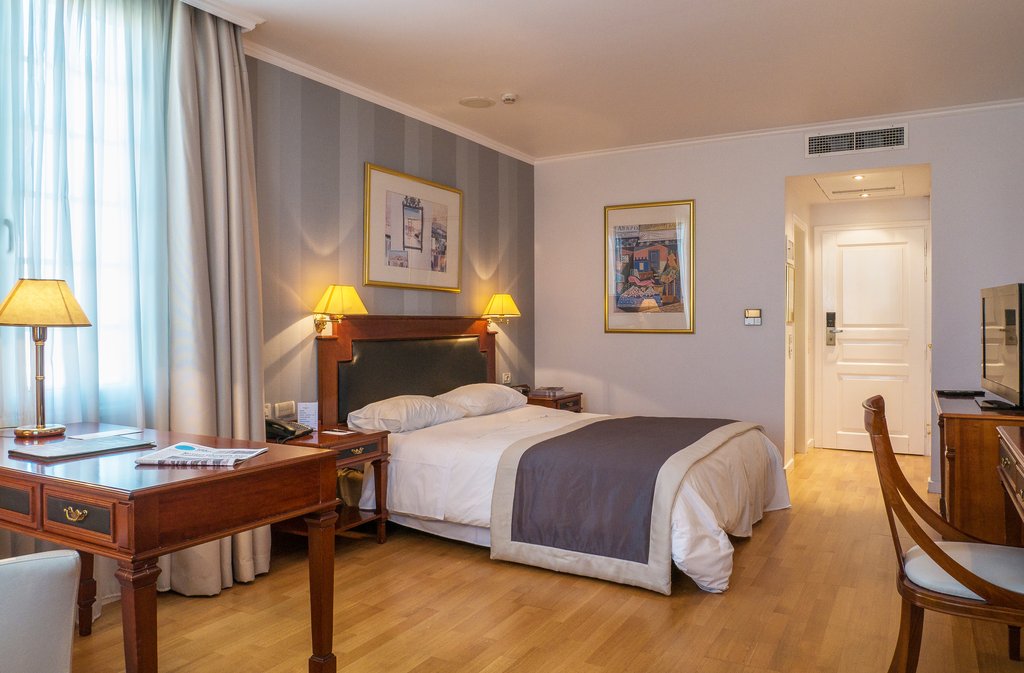 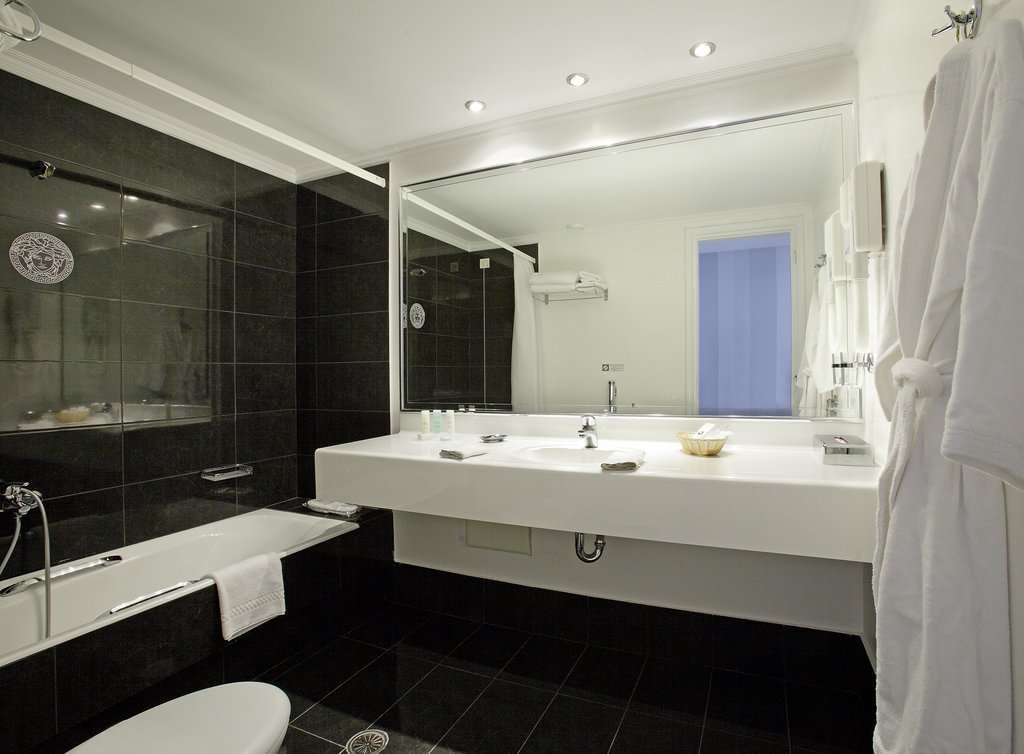 All rooms have been enhanced with classical elegant furnishings, an exceptional collection of paintings and the latest 32-inch LCD HD TV with Internet access for viewing Youtube clips, Netflix, Bluray and DVD player. 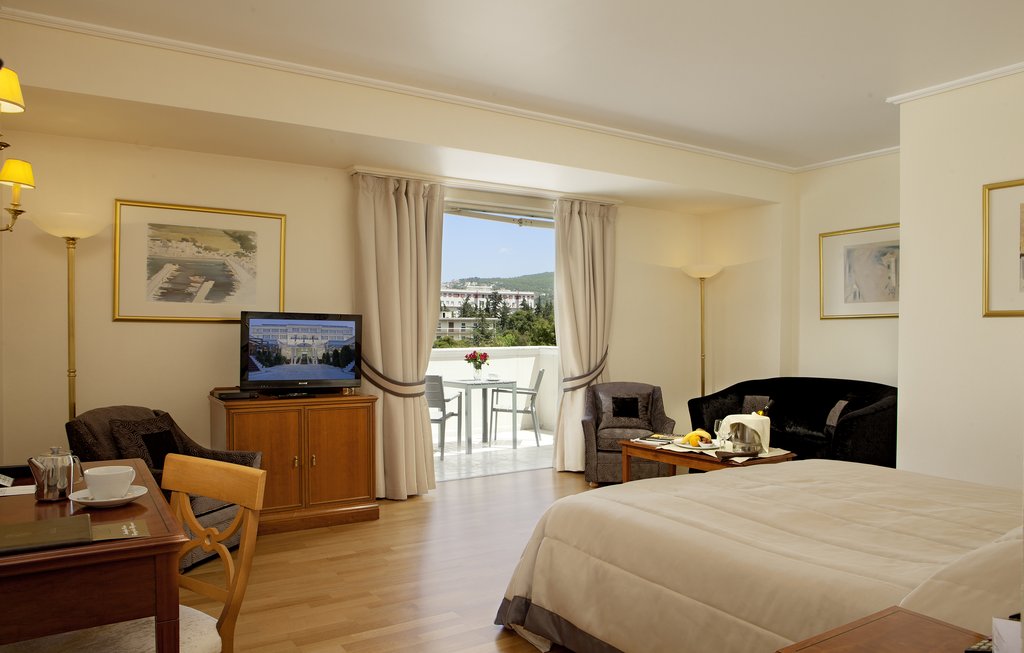 Located on the top floor, these rooms feature a spacious balcony offering a spectacular view of Kefalari and the surrounding area. Available with king or twin beds.

The Junior Suites with view to the pool offer an average size of 50 sqm. They have a large living and dining area, featuring a dinner table and a separate desk.

They have been enhanced with classical furnishings and beds of pure comfort, free wireless internet and the latest 40-inch LCD High Definition TV with Internet access for viewing Youtube, Netflix, Bluray and DVD player. 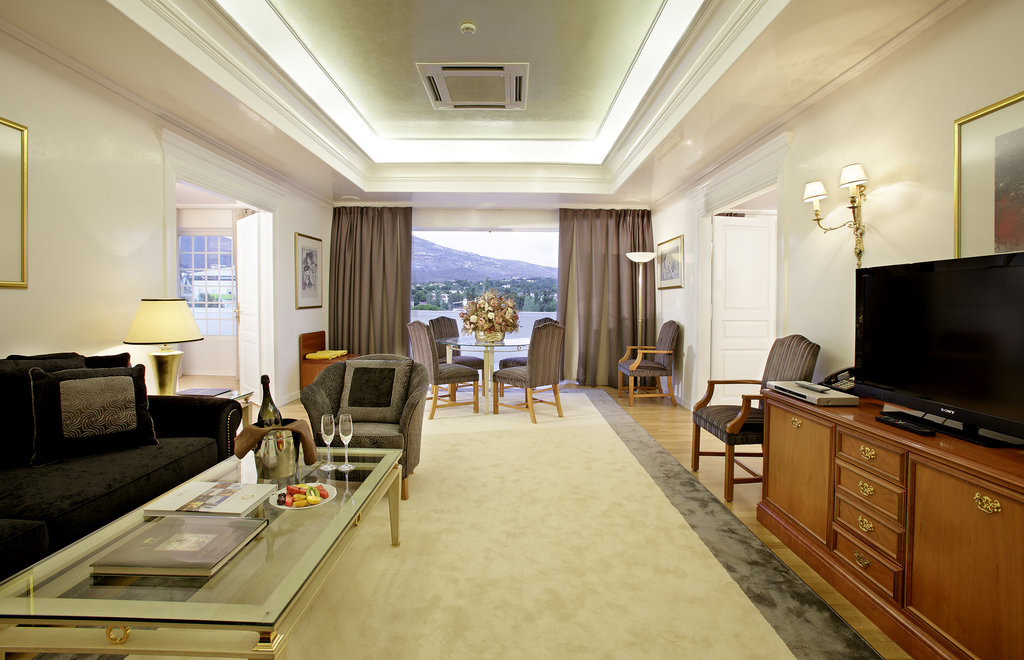 The Executive Suites offer a luxurious residential feel and a private location on the top floor.

Providing space and privacy for work and entertaining, with the bedroom and living room secluded from each other by individual doors, and with free wireless internet, the latest 40-inch and 32-inch LCD HD TVs with Internet access for viewing Youtube clips, Netflix Bluray and DVD player 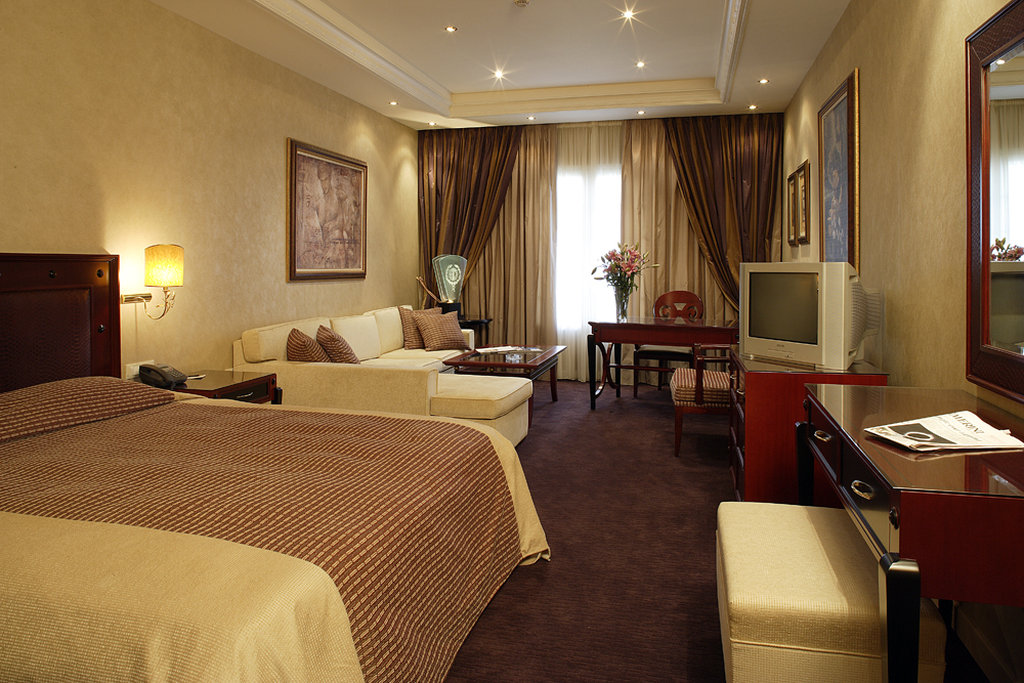 Offer relaxation, comfort and style an all-suite property very close to the main building. Experience the luxury of a grand hotel blended with the exquisiteness of a private home.

Contemporary facilities and services meet the expectations and the needs of both business and leisure travelers with free wireless internet, the latest 32-inch LCD HD TVs with Internet for viewing Youtube, Netflix, Bluray and DVD playre. 55 sqm 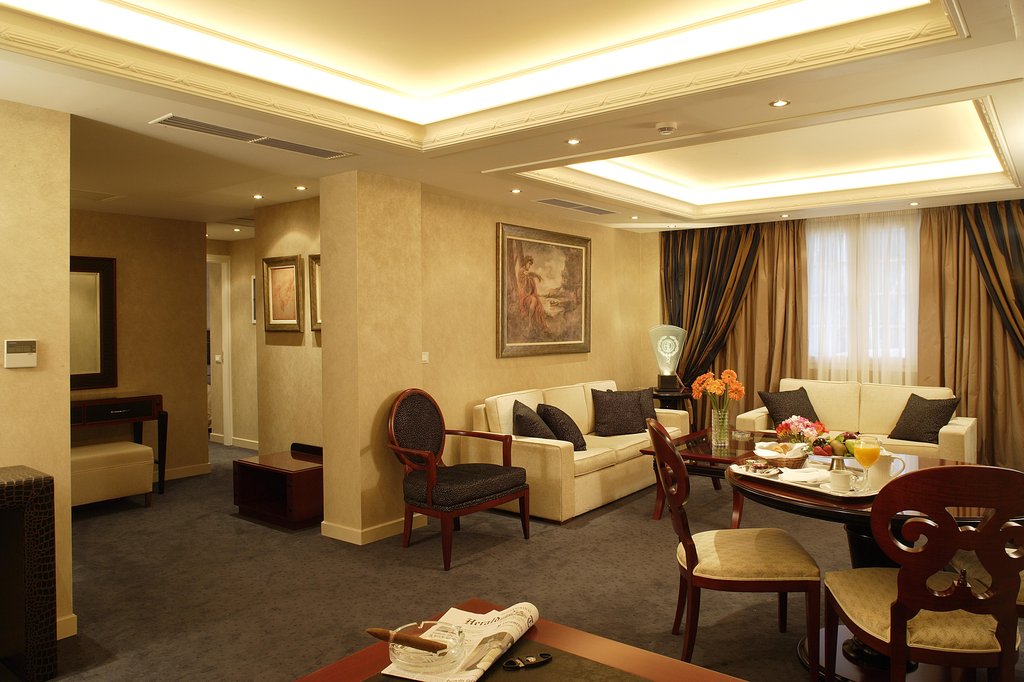 The Deluxe 2 Bedroom Suite located at Theoxenia House next to the main building features 2 bedrooms, 2 bathrooms, living and dining area.

With 95 sqm of space it is synonym of elegance and perfection. Indulge in a unique experience combining elements of luxury with a warm and inviting atmosphere, free wireless internet and the latest 40-inch LCD HD TV with Internet access for Youtube, Netflix, Bluray and DVD player

Minimum age for the pool 16 years.

Theoxenia Palace All Day Restaurant and Bar was created to offer its guests a sensual trip through Mediterranean and Greek cuisines. From the moment one enters they are transported to another world designed to relax and indulge all of the senses

At the Theoxenia Palace adults only Spa, purifying and restoring techniques are used to trigger the mind, body and spirit. Hotel guests can enjoy a healthy Sauna or Hamman session or can choose one of the various facial, body treatments and massage techniques offered by the Spa. Available by appointment, the hotel beautician will offer you a variety of enlightening and beneficial treatments that will rejuvenate and stimulate your senses.