Stunning country house hotel in the depths of Ashdown Forest

Bygone splendour meets modern indulgence at Ashdown Park Hotel. A listed 19th-century mansion set in 186 acres of landscaped parkland, the hotel and accompanying country club has its own 18-hole par 3 golf course, a spa, gourmet dining and a wide selection of leisure pursuits to enjoy during your stay.

Wander through Ashdown Park Hotel’s grounds to discover secret gardens, paths through woods and elegant lakes or simply gaze at it all through the large windows of your individually styled and beautifully appointed room or suite. Golf enthusiasts may prefer a Fairway Suite with magnificent views over the course.

Enjoy a leisurely round of golf or an invigorating swim in the indoor pool. Then, indulge in a pampering spa treatment or workout in the gym. Head into Royal Tunbridge Wells with its numerous boutiques, cafes, bars and parks. Return to Ashdown Park to dine at Anderida Restaurant where dishes are a modern take on classic cuisine. 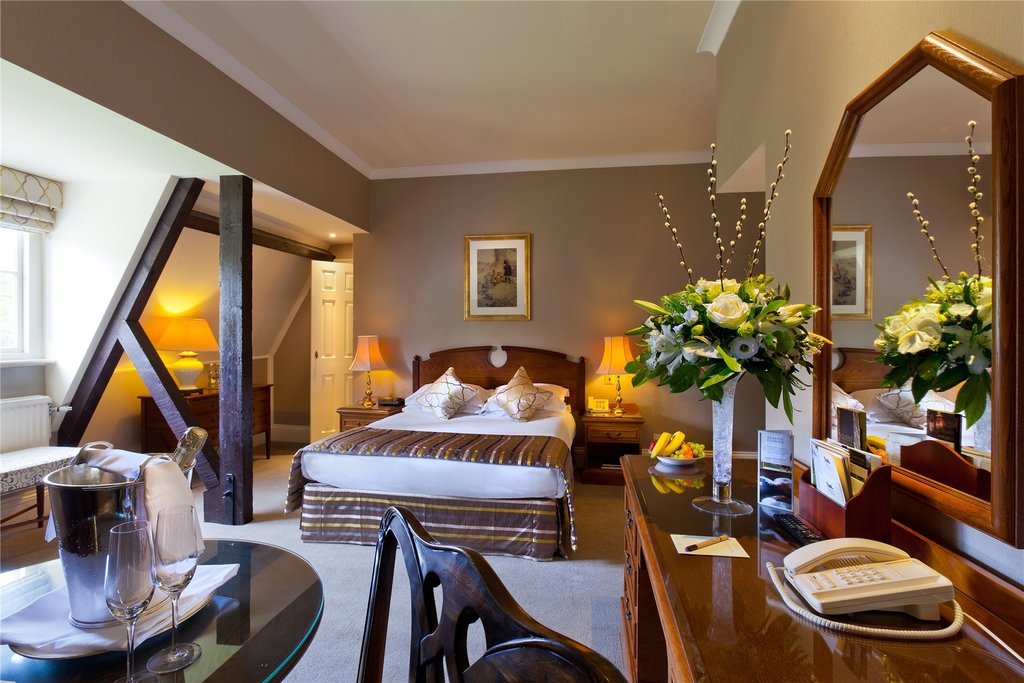 Deluxe Bedrooms are cosy and decorated in keeping with the hotel’s grand style. They are located throughout the hotel and are furnished with either double or twin beds, an armchair with coffee table. 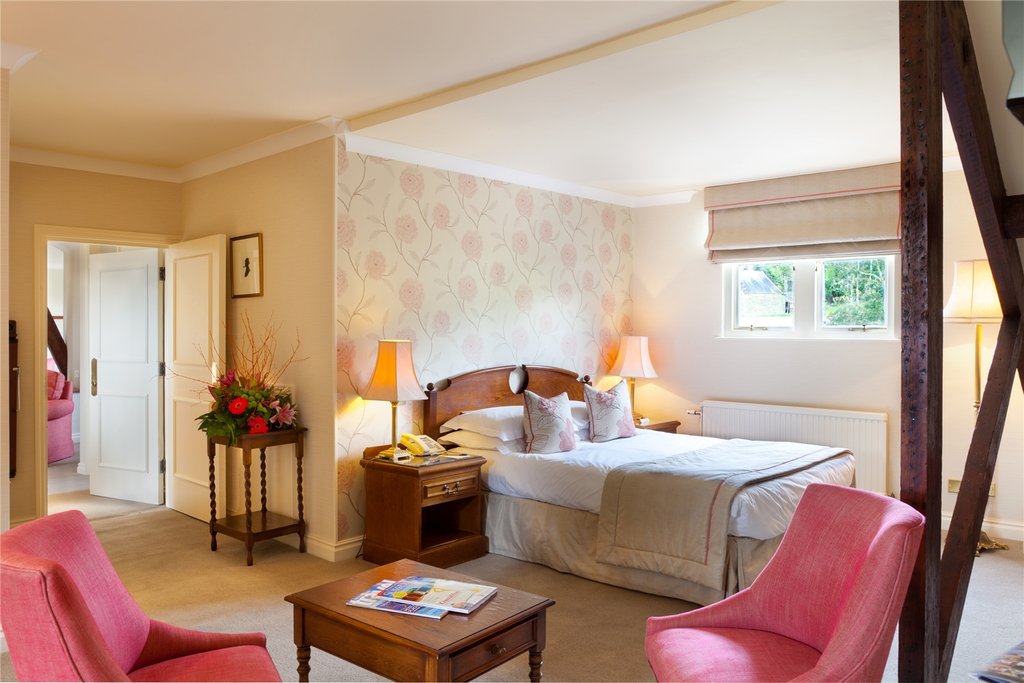 These rooms are more spacious than the Deluxe rooms with beautiful views of the parkland grounds. Deluxe Rooms with Parkland View have a double or twin beds, armchair and coffee table, writing desk. 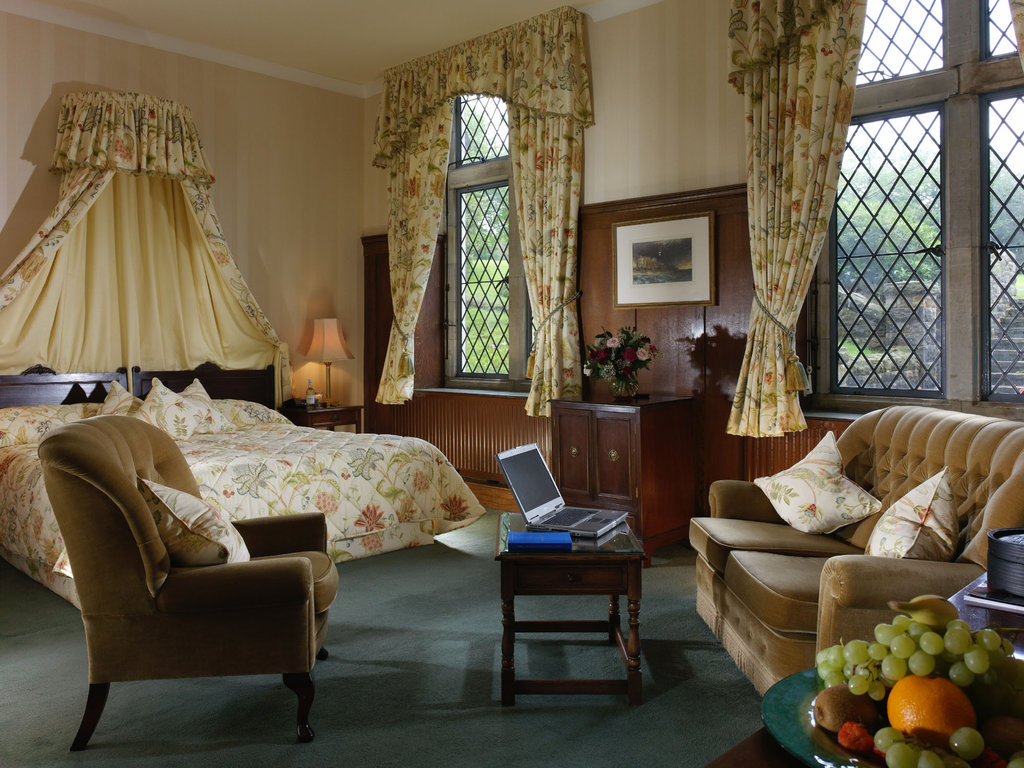 Executive rooms are large and spacious with either a double or twin beds and some offer a separate sitting room, as well as a larger bathroom than the Deluxe Bedrooms. 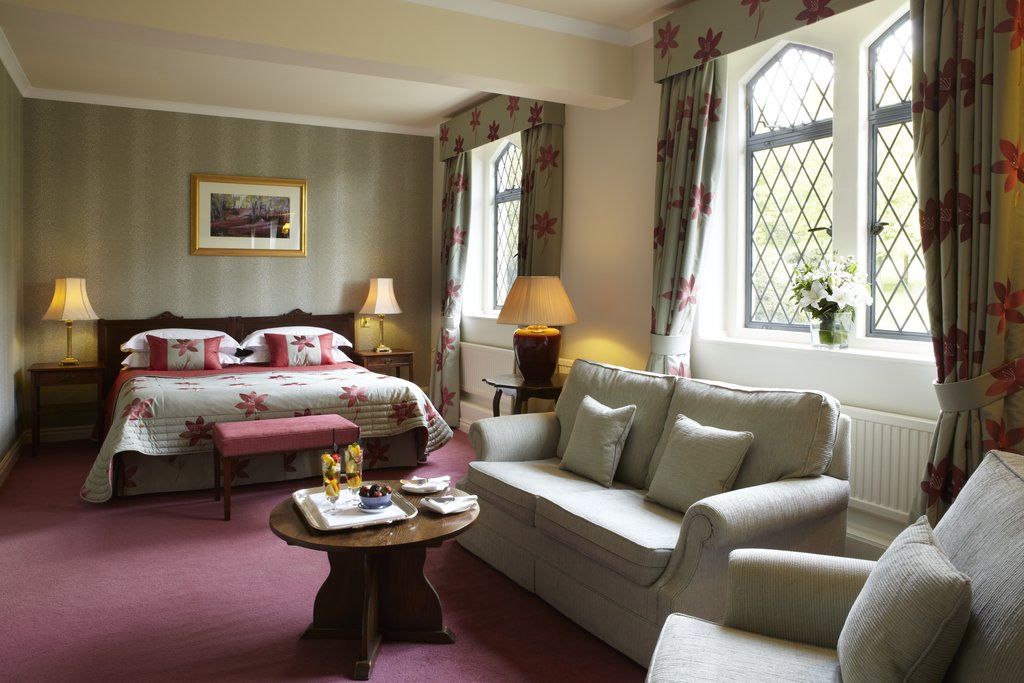 Junior Suites are perfect for those with a family or requiring more spacious accommodation. Some offer a separate sitting room with almost all having beautiful views across the gardens and parkland. 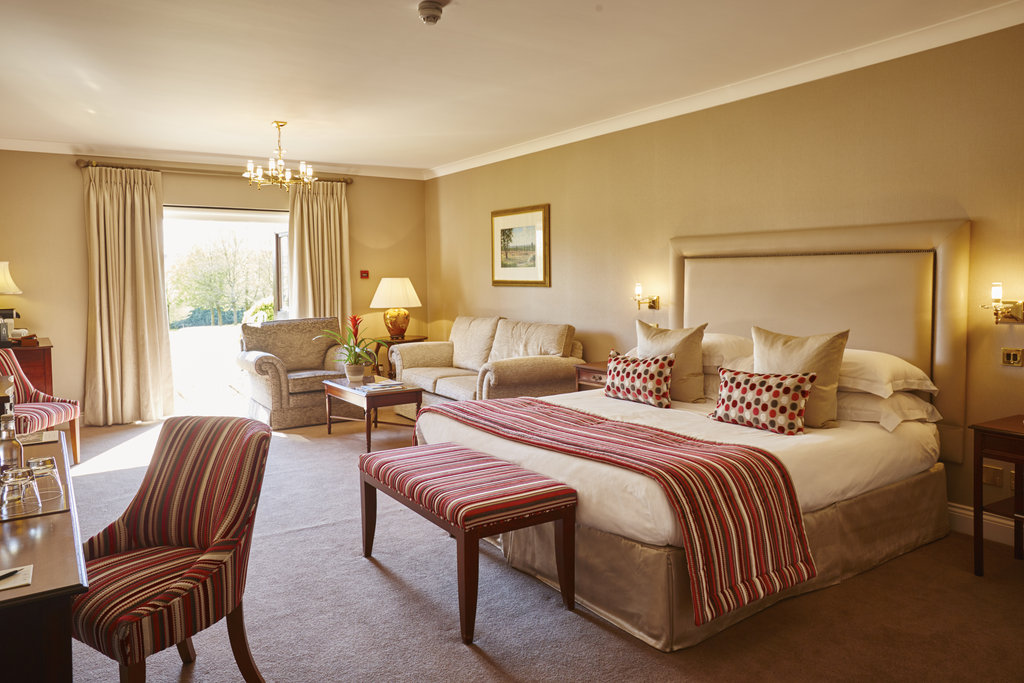 Located adjacent to the Country Club with panoramic views, these spacious suites offer a large bedroom, sitting area and stunning views over the golf course. 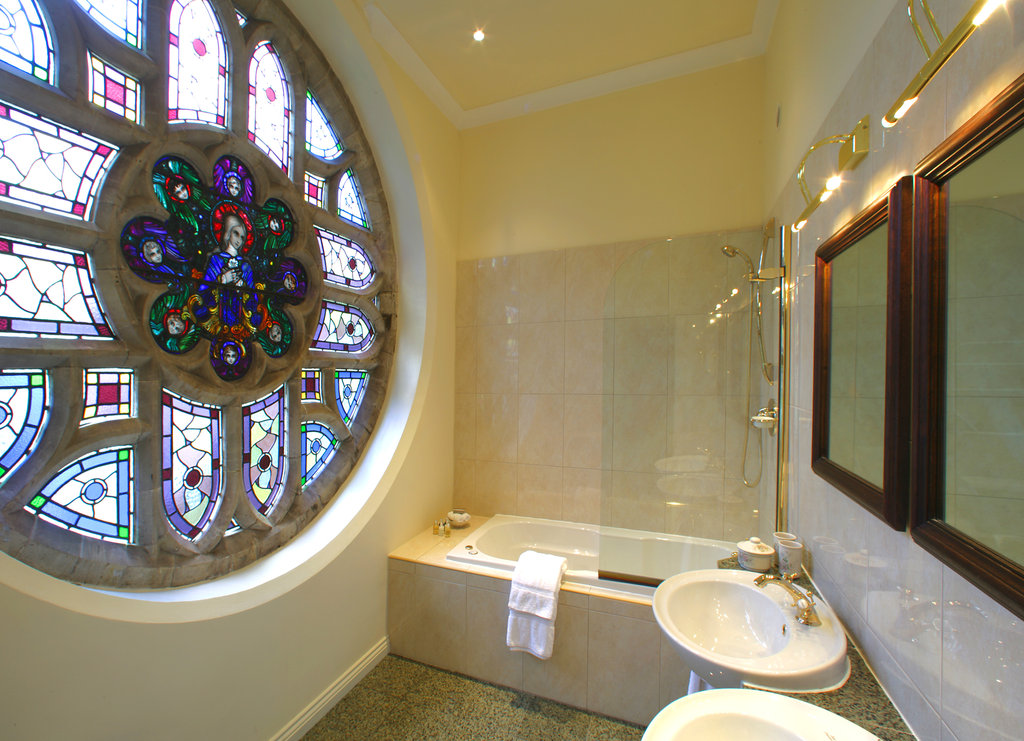 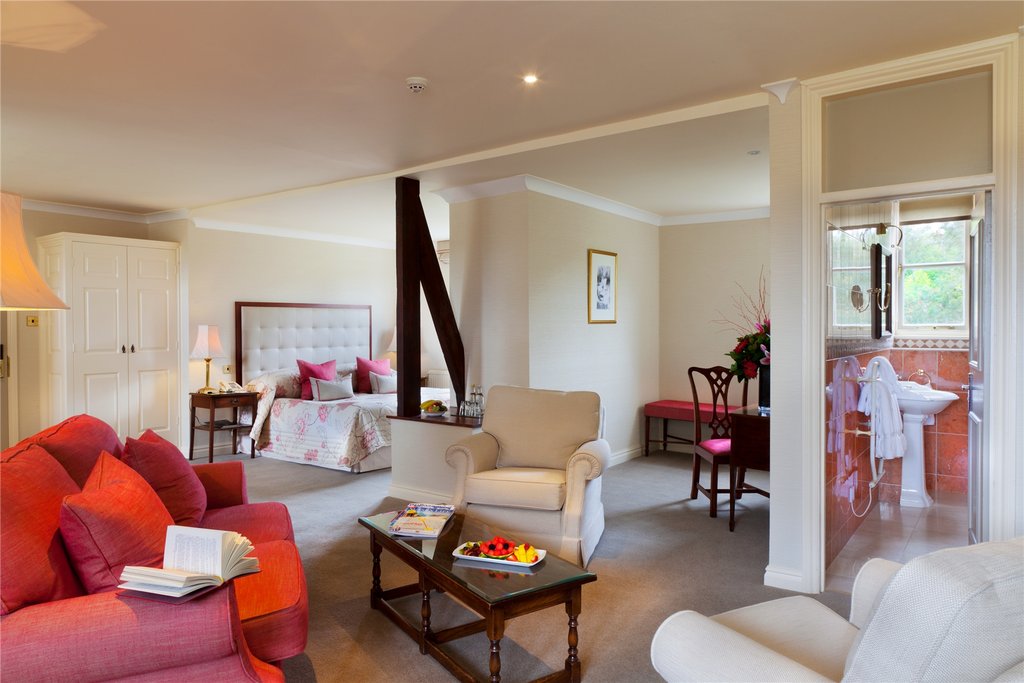 Our Suites are located throughout the hotel and many include two rooms, so that you can benefit of a separate lounge or reception area.

The bathrooms are larger and more luxurious, and some have corner whirlpool baths with separate walk in showers. Can accommodate 2 extra beds for children. Facilities also include complimentary Wifi and Nespesso Coffee machine with tea making facilities. Approx: 50-60sqm

Our Studio Suites are found throughout the hotel and have a separate lounge area and beautiful views The bathrooms are larger and more luxurious, and some have corner whirlpool baths. 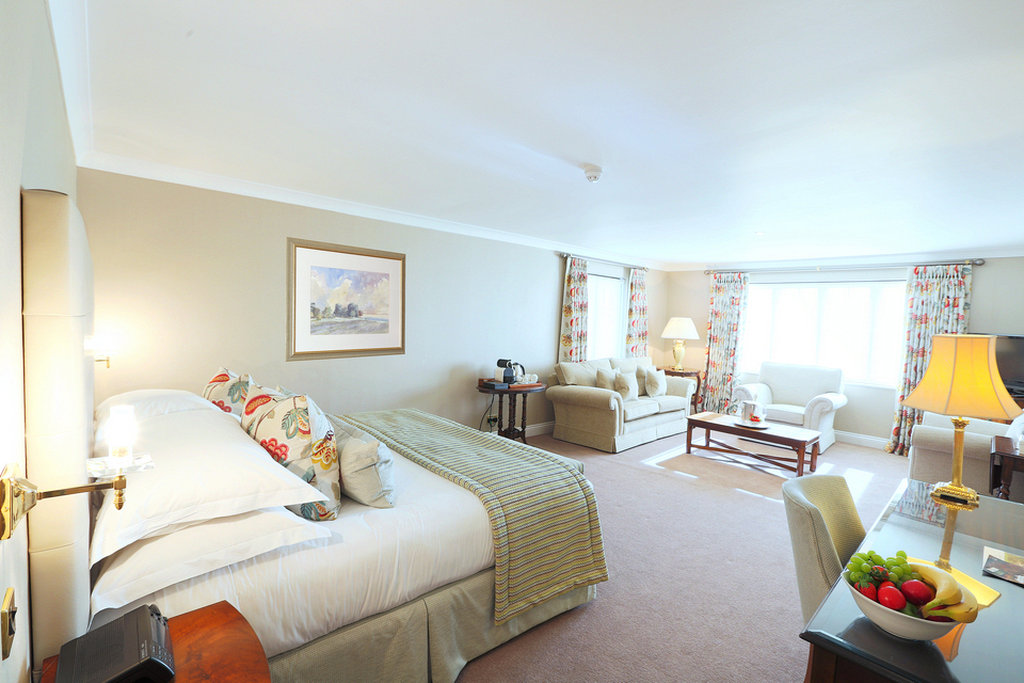 Located adjacent to the Country Club, these spacious suites offer a large bedroom, sitting area with a sofa and two armchairs and stunning views over the golf course. 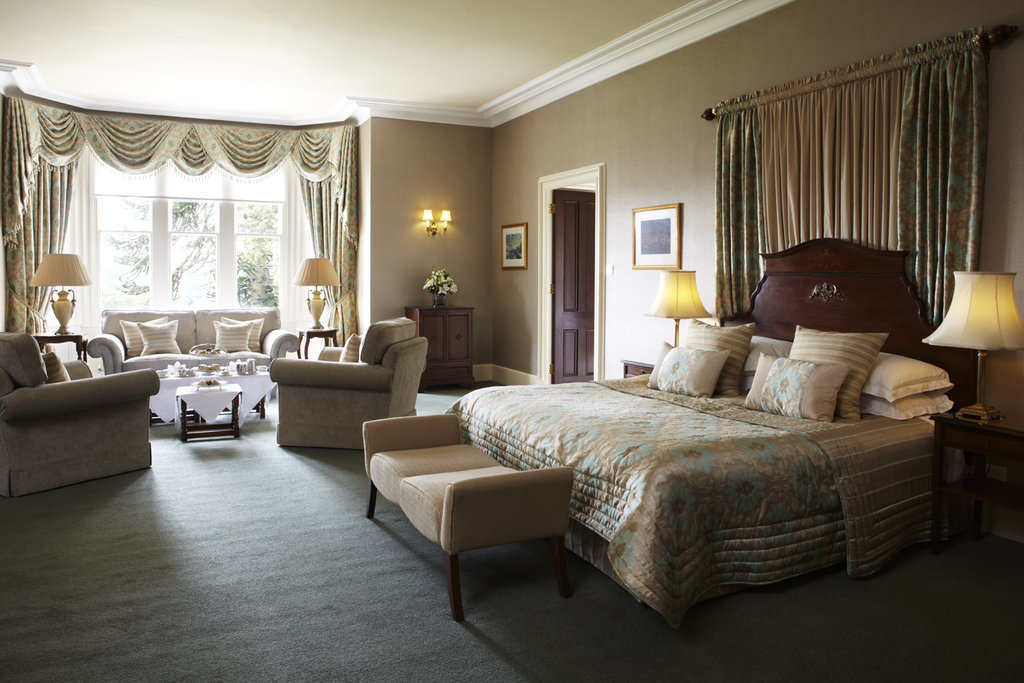 These are our top grade of suite and are the most opulent rooms in the hotel. Each is unique in style with either a king size or four poster bed, a view of the lake and lawns or our parklands.

An array of exclusive features from wood panelling to stained glass windows. All Master Suites have gorgeous bathrooms with Molton Brown toiletries and some have whirlpool baths. Approx. size: 55-65sqm.

Food at Ashdown Park is a memorable experience and likely to be one of the chief delights of your stay. Whether you order a light lunch, afternoon tea or a three course gourmet meal, you can expect the highest standards of cuisine and presentation.

Food at Ashdown Park is a memorable experience and likely to be one of the chief delights of your stay. Whether you have Breakfast Lunch or a three course gourmet meal you can expect the highest standards of cuisine and presentation. A candlelit dinner in the Anderida Restaurant with its soft piano music and stunning views over the Ashdown Forest is an experience not to be missed. Our head chef and his team produce highly imaginative dishes inspired by classical cuisine with a modern approach.

The Drawing Rooms offer a lighter menu throughout the day including an excellent selection of sandwiches. Here you can dine in comfortable surroundings with roaring log fires in winter and a terrace for alfresco eating during the warmer months. There is a wide choice of speciality coffees and fine teas to choose from and afternoon tea is served daily.

The Country Club and Revitalise Spa at Ashdown Park has been designed to offer the highest standards of luxury, service and pampering for hotel guests and club members alike. If you enjoy an early morning or late evening work out there’s a fully equipped gymnasium and indoor swimming pool. Golfers can pit their wits against our 18 hole, Par 3 course, which meanders through the landscaped grounds, and if “Anyones’s for tennis” we have two all weather courts. The Spa offers a wide range of beauty treatments, massage therapies and body treatments in luxurious surroundings where the emphasis is placed firmly on enhancing your peace and relaxation and overall sense of wellbeing. Our treatments have been specially designed in association with Kerstin Florian and Vitaman products, for both men and women, so that everyone who visits the spa can enjoy a perfectly rounded spa experience.